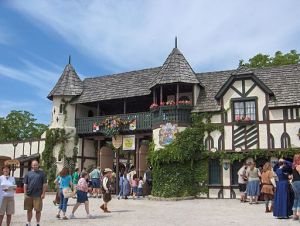 The Renaissance Faire, like so much else in geekdom, can be both intimidating and a whole lot of fun. Here are the three big things I wish somebody had told me before my first Renaissance Faire:

A word on garb – or period-esque clothing:

I adore garb! Weirdly, I don’t think I have a single photo of myself actually in garb. It doesn’t have to be complicated: 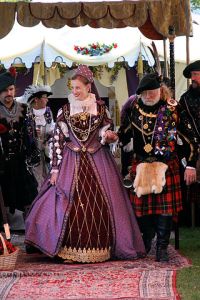 In fact, showing up dressed as the Queen would be a huge breach of etiquette. There’s only one Queen, and she’s an actress hired by the Faire. Moving on…Most people who come to Faire in garb wear some variation of the peasant look. For women, this means one or more full skirts, a chemise (a long undershirt), and a bodice. For men, it’s even simpler. Loose-fitting pants, a poofy shirt, and a leather belt and you’re good to go. Leather boots complete the outfit. 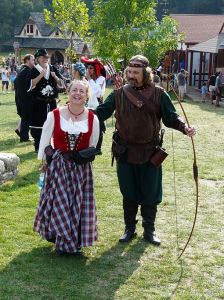 You don’t have to come dressed up in order to have a blast at the Renaissance Faire! Check out the photo at the top of this post – most of the people are wearing modern street clothes. That’s perfectly fine. Nobody is going to think you’re out of place if you don’t have garb. Likewise, you’re unlikely to get weird looks if you show up dressed as a gypsy or a pirate!

Historical accuracy is something of a controversy. Most Faires have a specific date they are trying to recreate. The actors and vendors may even try to stick pretty closely to clothing and speech of that time period. For the average visitor, most bets are off. As long as you go for something vaguely medieval (yes, I know, it’s called a Renaissance Faire and that’s later than the medieval period), you’ll be fine. Don’t show up dressed as a Klingon. This isn’t ComicCon. 🙂