Fighting For Her Freedom 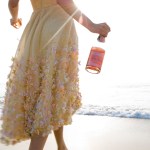 Renee forced herself to walk slowly, calmly, up the beach to the village. Her mother, Sporia, stood transfixed and angry, watching her go. Renee mourned for her mother, who would not attend her wedding, and for herself. As she walked, the cool sea spray cleansed her spirit and reminded her of things to come. She had chosen her path, and it wouldn’t do anyone any good to look back over her shoulder at the path not chosen. Renee breathed in the salty air and set her shoulders. She had a wedding to attend, and her bridesmaids would need help finishing the decorations. They had remade the village square into a fairy’s garden of white and red roses.

Behind her, she could feel the electricity in the air as Sporia gathered her power. She should have known her mother would not accept her defection without a fight. Renee kept walking, watching the ship that sailed at the horizon. This evening, her lover would turn the ship toward shore and stand before her in the village square.

“My daughter will be free!” Sporia’s voice carried over the deserted beach.

Renee looked back, tensed to feel the brunt of her mother’s gathered power, but the blow never came. She looked full in the face at her mother, the woman who raised her, taught her, and who would not let her go. Almost negligently, Sporia waved a hand at the sea. Renee watched as a green bolt of pure energy struck the mast of her lover’s ship.

“No!” She screamed, her self-control shattering along with the wood of the mast. She gathered her own power, ignoring the certain knowledge that she was no match for the older woman. She released the pale pink bolt of energy, which her mother countered easily, sending sparks raining down around them both.

“It is done! It is time you grew out of fairy tales, child. You are a woman now, with a woman’s power. In time you will thank me for saving you from your own childishness.” Sporia’s voice was calm, even patient.

“No. I will not.” Renee tried to keep her voice calm, but could not quite erase the rebellious tone she acquired as a teenager. She watched the ship flounder, its mast destroyed. “I will be free. I will claim what is mine, and you will not take it from me again!”

This is my interpretation of the weekly Red Writing Hood prompt. The theme is “Freedom.” If you missed last week’s installment, the story begins here. Part three is available here.

I’m writing this story a little differently – normally, I’m a plotter. I have reams of background research, character sketches, and so on before I write a single word. For this story, I’m writing by the seat of my pants! It’s a fun way to write, and it gives me the freedom to ask you – the reader – what you want to know about these characters. For next week’s installment, what questions do you have about Renee, her lover, or Sporia?

10 comments on “Fighting For Her Freedom”