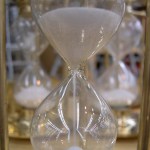 Sporia held up a single fistful of hot sand and laughed. Her hands, like the rest of her body, were smaller than one would expect for a woman of such power. Renee sat silent as familiar waves of enchantment washed over her.

“When the last of these grains fall, you will forget your dalliance with that simple man, and your mind will be clear, daughter.” Sporia opened her fist. The sand began to fall, a single grain at a time.

Renee, watched the sand, then smiled. Her mother was not the only powerful woman on the beach this morning. Another grain of sand fell, then a moment before it touched the ground, reappeared at the top of the unnatural hourglass. “I forget nothing.” She whispered.

“And if he returns, as he promised?” Renee spoke aloud.

Sporia laughed. “Men do nothing as they promise!”

“But if he does?” Renee pressed on.

Sporia turned to face her daughter. “Forget him! You had your bit of fun, but do not forget who you are. You are not some merchant’s daughter to fall in love!” The grains of sand began to fall faster than Renee could catch them.

“I am exactly what I am, Mother.” Renee said as another grain of sand reappeared at the top of the floating pile.

“You are a spoiled child. You have no idea how I fought for you, what I went through to escape with you.” Renee’s mind drifted as her mother lectured about the prison of marriage and motherhood. She had heard this story many times before, and could have recited it from memory. She noted, a bit sadly, that her mother’s face was more pinched, more angry than usual. “I did not waste my life teaching you the secrets of power, and strength, and knowledge, only to have you become some stupid wife!” Sporia spit the word out like so much bile.

Renee stood to face the sea, her simple white gown fluttering softly in the ever-present breeze. She smiled as her lover’s ship sailed at the very edge of the horizon, guarding the shore. When the sun began to dip toward the sea, that ship would turn and set course back to shore, as the night watch sailed out to take its place. In the evening, he would return to her, as he had every evening. As he would continue to do.

“I gave you the power to choose your own way!”

“And no one – not even you, Mother – will take that choice from me.” Renee spoke softly as she walked back to the village to continue preparations for her wedding. The falling sand froze for a long moment before gravity reclaimed it. The spell was broken.

This is my interpretation of the weekly Red Writing Hood prompt. This week’s theme is “sand” and the word count is 450. I’d love to hear your thoughts on this piece!

Want to read more? Installment #2, Fighting For her Freedom, is up now!