The King is Called Home, Part 4

This week’s installment was inspired by a reader comment back in part 2. It’s all part of the fun of a serial story – it’s evolving week by week, and even I don’t know what’s going to happen until I start writing! Today, Megan and Brian get a first taste of their new life.

(Want to catch up on the story? You can find it here.)

The King is Called Home, Part 4

Megan woke, startled, at the change in cabin pressure and roar of the engines as the plane began its descent.

“Welcome to Chicago O’Hare International Airport. Local time is 9:45pm, and the low tonight is 23 degrees. Enjoy your stay in Chicago, and thank you for flying with us today.” The pilot’s voice left no question in Megan’s mind – this was all too real.

Brian brought her hand to his lips. “Feel better after some rest?”

Megan nodded. “I do. It’s been a strange day. It will feel good to get in and soak in a hot bath.”

As the plane touched down, Brian leaned over to kiss her temple. His whispered order belied the tender gesture. “Follow my lead, and don’t show surprise.”

Megan simply nodded and squeezed his hand for comfort. She wondered what else lie in store before she could sink into the steaming, scented water.

At nearly 10 o’clock in the evening, the airport was a hectic jumble of luggage carts and overwrought toddlers. Megan recalled flying into Heathrow Airport for the Olympics in London. The small private jet had landed outside the commercial area, and their escort had ushered them directly to their waiting limousine. Her luggage had arrived in her room within the hour. The entire experience had been a study in orderly luxury. The passenger terminal at O’Hare was not. She and Brian were simply dropped off the plane into the sprawling terminal and left to their own devices. Megan looked at Brian. He had told her to follow his lead. Perhaps he had some idea where to go next.

Brian stood beside the long rows of blue seats and looked down at the ticket in his hand. For the first time all day, Megan realized, he did not seem in command of the situation. A voice over the broke through her thoughts. “Would passenger Brian Scardaugh please report to the customer service desk? Your party is waiting.”

An older man spoke to himself as he brushed past Brian. “Next stop – Baggage claim A.”

Brian glanced up at the man, then looked at the directional signs hanging from the ceiling of the terminal. “This way.” He placed his hand at the base of Megan’s spine, guiding her quickly down the passageway. Megan kept her features calm as she hurried to keep up, wondering who could have followed them to Chicago.

The baggage claim lacked any semblance of charm. The cold tile floors and once-white walls seemed infused with decades of grime from the millions of travelers who passed through this basement room each day. As suitcases began to appear on the conveyor belt that snaked through the room, Brian joined the other passengers at the sides, waiting to haul their luggage off the belt. It did not take long for him to collect their two small cases, hastily packed less than 24 hours ago.

“Let’s get home.” Brian spoke quietly as he set the suitcases down.

Megan nodded. “Which way to the car?”

Brian pulled out the envelope MacDuff had tossed into his lap as they fled Corlaund. “The car is parked in long-term parking. We take the shuttle. This way.”

Megan followed him outside into the frigid night. The older gentleman from the terminal was there as well, reading a newspaper to pass the time. He, like the other dozen travelers waiting to board the shuttle, completely ignored the Crown Prince of Corlaund and Lady Boderlund.

After a briefly interminable ride from the baggage claim to the long term parking lot, the shuttle stopped and several passengers quickly gathered their belongings. Brian pulled their luggage from the rack, and paused to let Megan stand without being jostled as she got off the shuttle. Standing alone in the freezing night, they scanned the parking lot for the car MacDuff had arranged. They found the small off-white Honda parked alone in the shadow between two street lamps.

Brian quickly unlocked the passenger door and held it open for Megan before loading their luggage into the trunk. Megan searched the dark parking lot but they were alone. If anyone knew they were in Chicago, they had not followed them to the car.

As Brian started the car, he handed her the manila envelope containing their new life. “There should be directions to the apartment in there, if you would . . .” 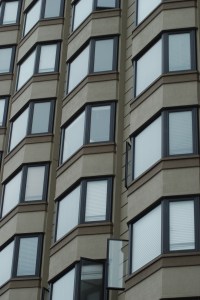 Megan nodded, and found the single printed sheet. She read the directions as Brian drove the unfamiliar city streets to their new home, a six-story concrete box. Its only feature was its perfectly spaced glass windows. She couldn’t imagine a more anonymous building. Brian parked the car in their allotted space and led the way up the cold concrete stairwell to apartment 4G. Megan was too tired to ask about an elevator, and slightly afraid that Brian would tell her there wasn’t one.

Brian unlocked the dark brown door and swung it open to give her a first view of her new home. The furnished room was not large, perhaps the size of her chamber at Castle Scardaugh. “Not a terrible foyer…” she thought as she walked into the apartment, trying to be positive. As she set her purse down, she realized that she stood in the kitchen, looking out at both bedroom and sitting room. There was only one other door in the room, which led, she supposed, to the bathroom. Brian nodded, kicking the door shut behind them. “MacDuff said the place was small, but…” Brian took a deep breath. “He knows what he’s doing. If this is where he’s decided to hide us, he’s got his reasons.”

Megan walked through the tiny studio apartment, noting the outdated décor and cheap furnishings. “True. No one will look for the Prince of Corlaund here. We will be fine for a few weeks, until MacDuff and your father find out who is behind all of this.”

Stay tuned for next week’s installment, which I’ll post here on Monday. Impatient? Leave me your email and I’ll send it to you on early:

(Don’t worry, I don’t have time to send you spam. All I’ll ever send you are stories and the occasional announcement when I’ve published a story elsewhere.)

2 comments on “The King is Called Home, Part 4”

2 Pings/Trackbacks for "The King is Called Home, Part 4"