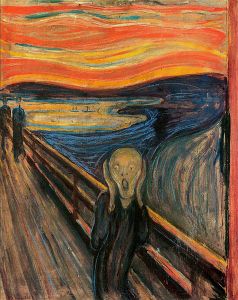 The Scream by Edvard Munch. A portrait of me on most days.

Every year for two decades, my husband and I have made the same goal: “No major life events.” We’ve even limited “major life event” to the Big Three: a new baby, a move, or a job change. Things that inevitably turn life upside down and shake it for a bit. The one year that we managed to avoid the Big Three, one of our sons spent the entire summer in Intensive Care while the other kids traveled from relative to relative. That counts.

This year is different though. This year, instead of hoping for stability that never comes – although we’ve always been better off for the changes – I’m embracing the upheaval, and actively going after it.

This year, I’ll finally do something I’ve dreamed of since I was old enough to read chapter books: I’m going to write a novel (ok, two). I’ve written books before, but they were nonfiction. They didn’t terrify me the way this one does.

This is the year that I let my inner two year old have free reign. I’ll stomp my foot and throw insecurity across the room and watch it shatter when it hits the wall. 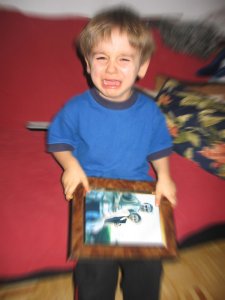 This is the year that I channel my inner teenager when Reason and Practicality wag their fingers at me and tell me to do the dishes, and sneer “You can’t make me. I’m writing.”

The novel isn’t the only thing on my list this year – and if we’re being brutally honest, some of them probably won’t get done. Life happens, and even my inner teenager can’t always do anything about it. But the fact that these goals exist, that I’ve had the sheer nerve to write them down, to put them on the calendar, to plan on them, is a giant leap into 2013.

For this week’s Pour Your Heart Out meme, I’m sharing them. Publicly. Because sharing brings accountability. Now you know the sheer level of my ambition and insanity. You expect it from me. You expect these stories. I can’t let you down!

Getting Out There:
Maintain and grow my fiction blog, including a weekly serial flash fiction piece.
Re-envision and grow my Disney blog to focus on storytelling and fairy tales.
Promote my work on Facebook, Google+, and via guest blog posts.

8 comments on “Embracing the Upheaval”